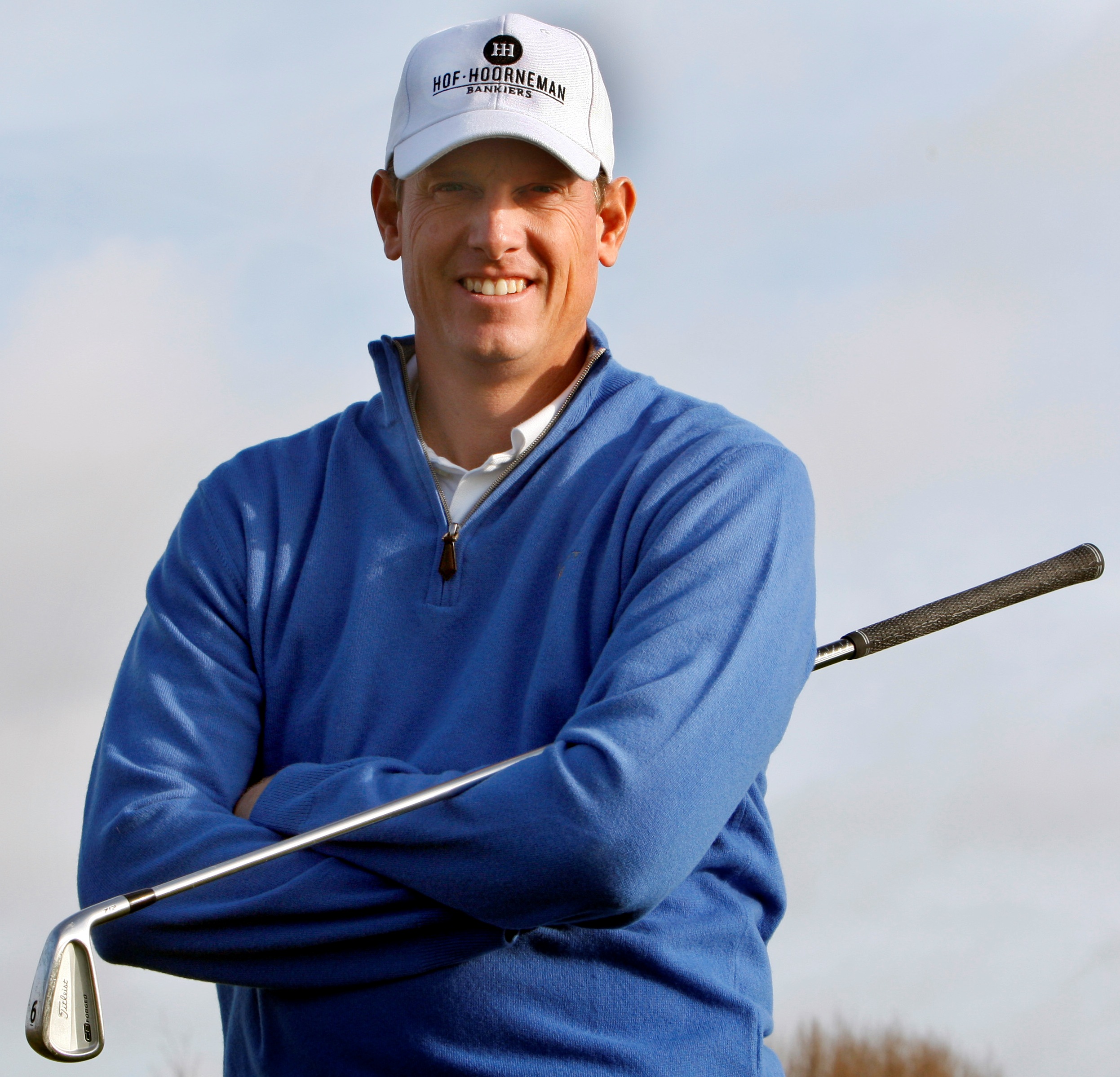 Has played golf since: 1990
Has played golf professionally since: 1997
Length: six foot four
Weight: 87 kilos
Hobbies: All kinds of sports, watching movies and playing with my sons Guus, Louis and Tony.

Maarten Lafeber was only fifteen, when, in the winter of 1990, his father Erik took him to "Golf club Welschap." This took some getting used to after a "career" in the world of tennis. From the age of six Lafeber had played on gravel and in 1990 he joined names like Sjeng Schalken and John van Lottum in the C-selection of the KNLTB (Royal Dutch Lawn Tennis Association).
However, one lesson at "Welschap" was enough to change Lafeber's life and only a few weeks later he waved practicing tennis goodbye. Then things rapidly took their course: within a year he acquired handicap eight.

Lafeber played his first golf match in 1992 and a year later he made his debut in the Dutch national team. In 1995 he triumphed at the Dutch Championship Strokeplay, a victory he would claim again two years later.
During the Microsystems Dutch Open 1996 Lafeber established his name, after a 65 he made it to the top ten on barely the third day; the lowest score ever by a Dutch amateur in the Dutch Open.
Aged only 21, a few weeks later he came in second after a play-off in the individual European Championship in Sweden.
The season of 1997 was memorable in many aspects. Together with the Dutch Team, Lafeber ranked fifth at the European Championship in Dublin. A couple of months before he beat Sergion Garcia in the finals of the International Spanish Amateur Championship and his last success was a win during the International Swiss Amateur Championship - with birdies on the last three holes.

The journey to the top is long. And dear. Funding the first years of Lafeber's career wasn't made possible by one or more main sponsors, but by a revolutionary plan which existed of distributing 7,500 preference shares worth one hundred old Dutch guilders each. The brain behind this scheme was Lafeber's former captain at the Dutch Team, Michael Floris. Together with Theodoor Gilissen Bankiers, the former Arthur Andersen (now Deloitte & Touche) en Nauta Dilith the emission was collectively prepared and introduced in GOLFjournal on December 12th in 1997. People were greatly interested, which lead to all the shares being sold within a fortnight.
Future Golf BV, the official name of the "company" could get weaving immediately having brought in a sum of 750,000 old Dutch guilders (over 340,000 Euros).

Through two pre-qualification games, Lafeber qualified for the Qualifying School for the European Tour, which was held in San Roque and Guadalmina, on the south coast of Spain. It was a memorable and rainy week when Lafeber came in shared fifteenth and the tour card for 1998 became reality. That very week also Robert-Jan Derksen and Chris van der Velde obtained their starting permit for the European Tour.

1998 - All beginnings are Difficult

During his first tournament Lafeber was disqualified after a faulty drop at a water hazard. That incident at the Johnnie Walker Classic in Thailand more or less set the tone at the Tour. Thirteen tournaments later he made the cut only three times, and winning 7,469 Euros prize money put Lafeber 194th on the Order of Merit.
The tour card had lost its validity.

Thanks to an invitation of the European Tour, Lafeber was allowed to participate in the Kenya Open, the first match of the Challenge Tour. The man born in Eindhoven came, saw and conquered - a score of 265 strokes, nineteen under par. This triumph basically was decisive to perhaps the rest of Lafeber's career. Immediately he got a starting permit for what still remained of de Challenge Tour. With another four places in the top ten, Lafeber came in seventh on the Order of the Merit and promotion to the European Tour 2000 was established.
In between the matches of the Challenge Tour, Lafeber also participated in the TNT Dutch Open. Ranking fifth - the best result achieved by a Dutchman in nearly twenty years - made the Hilversum Tournament a grand one.

Having won over 185,000 Euros in prize money and reached 85th position on the Order of Merit Lafeber fairly easily preserved his tour card. He played 30 matches, achieved nineteen cuts, and a sixth place in the Volvo Scandinavian Masters was his finest upshot. In Sweden Lafeber played in the last flight in the fourth round along with the soon-to-be winner Lee Westwood. With a cheque worth close to 45,000 Euros, Lafeber safeguarded his play rights for 2001 already in August. Also his qualification for the British Open on the Old Course of St. Andrews was significant. In his first Major he missed the cut on merely one stroke.

In 32 matches Maarten Lafeber achieved the cut fifteen times and his average score numbered from 72,24 in 2000 to 72,08. He successively realized top ten places in South-East Asia (seventh in Malasia en third en Singapore) but there were - in mid-season - eight missed cuts as well. On the Order of Merit Lafeber plummeted to 103. He made 183,435 Euros. During the journey back from Japan, after the World Cup together with Robert-Jan Derksen, Lafeber knew his current approach would not give him much more recognition than the status of "greatly average professional."

The helm needed to be put over and so it was. Together with his new coach Gregor Jamieson he laid the foundation for a fresh start.

A gain of 54 places on the Order of Merit, 103 to 49, and nineteen cuts in 29 matches translated to a substantial prize sum of 465,944 Euros. The most majestic cheque arrived alongside an impressive eleventh position in the Volvo PGA Championship en his best result was coming in second at the Madeira Island Open, a tournament that should have been his. For the first time Lafeber chipped in at the concluding Volvo Masters in where he got his hands on a highly venerable thirteenth position.

Whichever way you look at it, Lafeber's season in 2003 was the best season a Dutch golfer ever had the fortune to experience. After a good start with a third position at the BMW Asian Open and a fourth in Singapore, Lafeber had a substantial relapse in the spring. During the Smurfit European Open In Ireland, he and his mental coach Jos Vanstiphout decided to go and work together intensively which resulted in not one missed cut in 2003!

The very best part, obviously, was the victory in October at the nearly bereft-of-life Dutch Open in Hilversum. Being watched by thousands of fellow countrymen, October twelfth became a victory march. With a score 267 strokes he made himself the Dutch winner of the Dutch Open in 56 years. For that matter, a week earlier Lafeber handsomely came in fourth at the well-filled jackpot of Dunhill Links Championship. Being 29th on the Order of Merit, Lafeber almost won 727,000 Euros and there he was knocking to the door of the top hundred of the world rankings.

A bow long bent at last waxes weak. The injuries in particular caused a minor relapse. No victories or top three positions on the Order of Merit, but, luckily, top ten positions at both the Dunhill Championship en Johannesburg en the Smurfit European Open in Dublin. Another highlight was the qualification for the British Open on Royal Troon. Unfortunately Lafeber missed the cut in that Major.Despite the trouble with his health he managed to conserve his place amongst Europe's best 75 for the third consecutive season. To Lafeber this was enough to be able to reimburse his shareholders with a sizeable interest. Every share of one hundred Dutch guilders turned out to be worth 185 guilders. A return, since late '97, of 85 per cent!

Another memorable performance was the fifth position Lafeber in conjunction with Robert-Jan Derksen scored during the World Cup. At Real Sevilla the couple collected a mere total of 23 under par. Not ever before during this tournament, which was held for the first time in 1953, The Netherlands finished this high.

After a season which was less successful, Lafeber strongly returned with his new main sponsor, F. van Lanschot. Four top ten quotes - as well as silver at both the Singapore Masters and the Scottish Open - and a number of missed cuts which was negligible yielded to a 25th position on the Order of Merit.
It was the fist time a for a Dutchman to be so successful on the annual rankings of this circuit. Another national and personal record was the well over 820,000 Euros he made out of it. Additionally, Lafeber qualified for two Majors: The British Open en the USPGA Championship. At St. Andrews the Dutchman caused quite a stir through advancing to a position amongst the ten best in the third round. Unfortunately, after a despondent concluding day he dropped to the 41st place - still the best routine by a fellow countryman in ages. Because Lafeber climbed to the top hundred of the world rankings after coming in second at the Scottish Open, he received an invitation for the USPGA Championship. Something that had never happened to someone from The Netherlands before.